So began, and ended, a phone call from my granddaughter when she was two years old. I had no idea, nor did she, what Chickamunga meant, although it meant so much to me that I named my house for it. (In Carmel, California, in those days, houses in the village had no numbers, only names.) I had a hand-painted sign made for it, and years later gave it to her as a return gift of love.

The power of words to move us, to touch us, is well-documented. I cannot write words for these essays until I have read, and re-read, passages of poetry and commentary that alter my soul. There are simple words, like "Dear John", that have the power to devastate us. There are imaginary words, like "Supercalifragilistic", that make our imaginations soar, and propaganda words, like "Uncle Sam wants you!", with ominous overtones. Sam is my father's name, not my uncle's. Why does he want me? It is said that the U. S. government has approved "mass fatality planning", including coffins large enough for several bodies and liners that ironically don't fit the coffins. Does Uncle Sam have my name on one, or any, of them? Or will I be the unknown human, fodder for eternity?

My writing is becoming part of my unplanned obsolescence. If kindergartners are required to learn computer programming as part of their curriculum, as has been proposed, then I am immediately illiterate. If other civilizations communicate with other than words - you didn't really believe that we are the only intelligent beings in the entire cosmos, did you? - how will we get along? On the brighter side, when traveling in countries like Finland where I didn't know the language, a smile and a handshake were all that were needed to make a connection. But that assumes that other-world creatures have hands, or indeed smile. My images tell me otherwise. 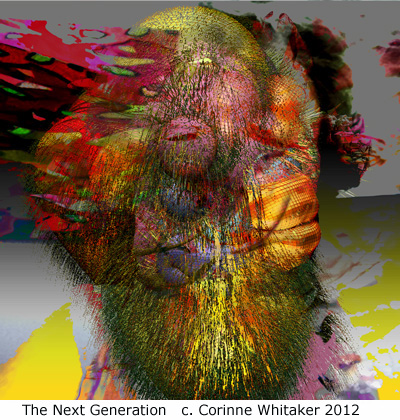 As I write or create images I don't answer the phone. I need to be wrapped in silence, except for the congregation of tiny birds looking in from my lemon tree. Philosopher John Gray (1) tells us that "silence for other animals means rest. But the noise that other animals flee is created by other animals. Humans are the only animals that flee internal noise. Humans throughout history, and prehistory, have engaged in all sorts of meditation, either to shift the way they perceive the world or to produce in themselves, some state of silence, from which something else will come." So I put myself in touch with prehistory, in order to perceive an alternate universe from which unforeseen creatures emerge. 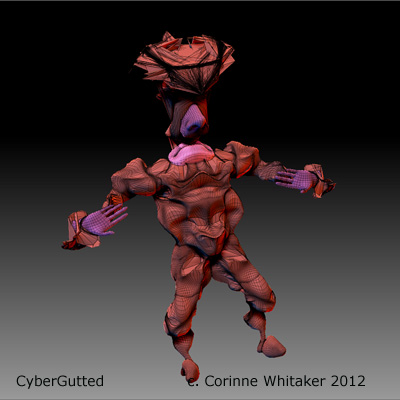 When the images/sculptures/models are finished, it is then that I look for ways to name them, things we call titles. If they say nothing to me they are trashed. If they say something that seems illogical or unfathomable I keep them anyway. My mind knows more than I do about the sources of these complex and frequently indecipherable imaginings. In one series called Escaloop I invented all the words in the titles. In another series all of the pieces started with the letter Z to indicate the end of artistic vision as we had known it since the Renaissance and the start of a new visual iconography. Sometimes I will return to the titles of earlier pieces and have no idea what I had in mind: what, for example, does "E=IM" mean? There's a meaning, if not an app, for that, though I have no clue what it is.

So we make words, and sometimes we break our words, to ourselves and to others. As Richard Falk noted recently, "we are in denial about the wrongs we do to others, while being haunted by those done to us."(2) But when I am haunted by the harsh words of someone supposedly close to me, I will remember always the recent words of a museum curator whom I admire but do not know well. When I wrote about the essential alienation of being an artist, particularly an artist whose works leave many scratching their heads in bewilderment, he wrote back and said, "I believe in you".

And I burst into tears.

Notes: (1) quote from "The Silence of Animals" by John Gray

(2)Richard Falk's superb blog can be found at falk.