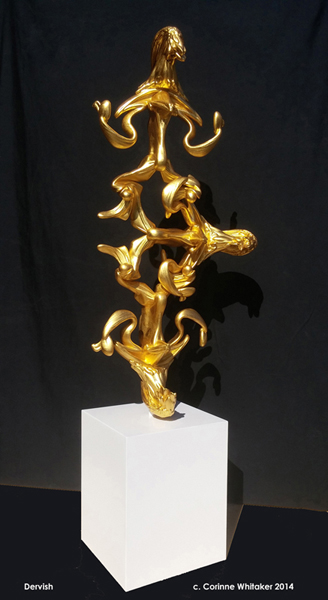 The Goddess of Iniquity

Once upon a year ago, this sculpture was called "Dervish". I have decided to rename it The Goddess of Iniquity. Because, hand-painted in 22 karat gold leaf, it reminds us that gold has been the source of greed, rapaciousness, brutality over the centuries. Because, watching the baseball season finals, I was struck by the ugliness of certain teams and their fans - Dodgers, for example, and Yankees - contrasted with the sheer joy of the Brewers, their camaraderie, the delicious charm of their dancing bratwursts. Milwaukee players and fans reassure me that there can be joy in Mudville, not just rage over the quest for a trophy.(3)

It's all there in black and white. My father, my first hero, told me that truth was writ large in black and white in the scrolls of the torah. But at synagogue I saw women interested only in showing off new clothes and boasting of price tags and designer labels. I saw truth as an exclusive country club, whose members were males only: women were segregated and denied access to the significant prayers and rituals. The Rabbi ran off with a woman he was counseling for a troubled marriage. Power vested in maleness, white maleness, and money, identified by hypocrisy and bullying.(1) How ironic that our leaders today have turned truth into a dessicated coconut to shred at their will.

Black and white dominate our lives still, in our insistence on the Us and the Other, in those who hide themselves and disappear others. Why do we still tolerate those white men in white robes who disguise their hatreds: are they as ashamed of their murderous deeds as we are? Does residence in a white house mean lawlessness and contempt are given free rein?

Their brethren try to hide women in burqa-black robes, so that the gender that gave them birth can be totally hidden from view. The old game of hide and seek has been transformed into an ugly human drama of violence and discrimination.

A surgeon once wrote that the inside of a human body is the most silent place he had ever visited. But silence hangs by a sheer thread in today's world. Yes, we offer a moment of silence for those who have moved on to another realm. But that moment is obliterated by the raucous noise of dissent, our common language.

It may seem strange for an artist to yearn for a colorless world, one where skin tone and eye shape, body bumps and lip size, hair styles and diction don't vie for supremacy. We are all born naked. It is that simple.

I don't want to see you naked (or, at 84, myself either, as a good friend reminded me with a mirror for my birthday).

But I would like to strip the insanities, the inequities, the hypocrises, from our conversations. I would like to honor the Buddhist tradition called upekkha - a word that means equanimity, a state of mind that is "abundant, exalted, immeasurable, without hostility and without ill-will." (2)

Buddhists call it the highest form of love. I would love to call it our oneness, the rosetta stone of being. If I can rename a piece of sculpture, surely we can redefine how we treat one another.

We can try, although Lewis Carroll warned us, "If it was so, it might be; and if it were so it would be; but as it isn't, it ain't. That's logic."

Can we start to embrace the illogical, one friend at a time, one hand- shake at a time, one day at a time? Can we re-crown truth as a symbol of integrity, an emblem of trust? I could certainly use less shredded coconut in my life. How about you?

(1) Women Artists of the American West

(3) Here is more on fan frenzy