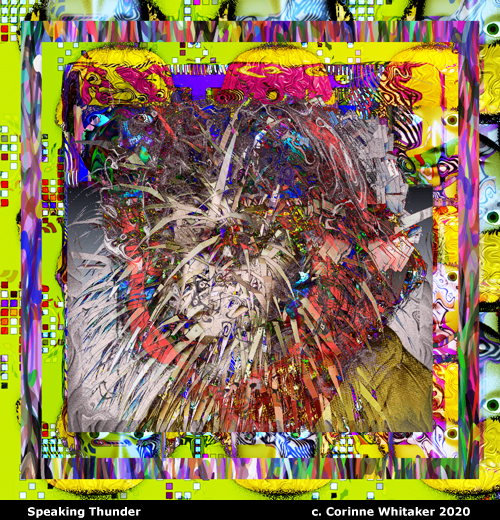 Do you see what I see? Do you hear what I hear? No, it's not Christmas and I am not caroling. What we see and hear fascinate psychologists and sociologists. It is claimed that early humans, when first confronted with thunder, were unable to comprehend its existence. Perhaps they responded by "seeing" the sky as a huge body that speaks, with thunder as its language. (1)

These are questions that artists have been asking for millennia, and still ask today. Except that now we add "liking" to"seeing", a new obsession in the social media world. Sometimes we are offered prizes for liking. But the only prizes gained are by advertisers, who would like nothing better than to see more of what they think you like, based on what you think you like.

As an artist, I know I like images. In those antediluvian days before the Internet, I saw art on the printed page. In elementary school I was an image junkie. Images took me to dream worlds. They held out the plum of far-flung lands where elegantly clad damsels and posturing gentlemen blotted out the cigar-mouthed men and mean-spirited women that lived in my real world. When a friend was brutally slapped in the face by her anger-bloated mother, I could escape to those color-filled lands. When my parents thought they had failed to produce the perfect child of their dreams, the library, with its exotic illustrations, filled my imaginings. Images drowned out the sound of the New Haven railroad trains roaring past our home, taking other people to exotic locales I yearned to visit. Images obliterated the sight of the concrete slab that pretended to be a grassy playground at our local grade school.

Forty years ago we had no graphic programs for the computer, so I wrote to the National Supercomputing Center in Illinois and bought a program on thermal heat properties. I knew nothing about thermal heat properties, then or now. I simply entered irrational numbers into the equations to see what would happen. Mostly nothing happened, but occasionally a gorgeous graphic would appear. My software engineering friends wanted to know the equation: they were dismayed when I told them I had destroyed it. They wanted to recreate what I had seen: I wanted only to see more.

As choreographer Bill Jones has asked, "Was Picasso exploring planar geometry in his paintings and taking apart the face because it's good for us to look closer?" I don't think so, and neither does Jones. He says we have voices, and we speak out, without knowing if anyone even gives a damn about what we are saying.

So I speak thunder. 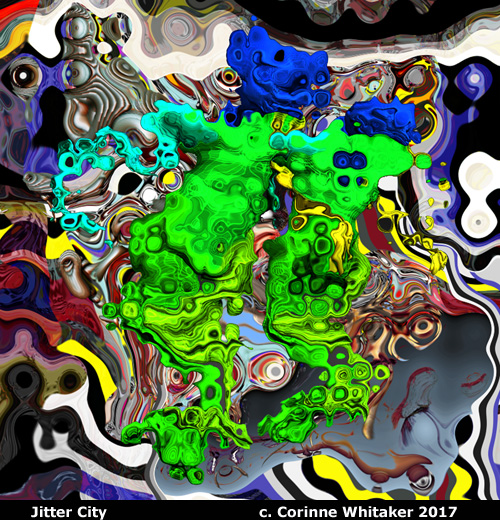 What if the things I envision are seen by no one else? Is it my goal to be popular? Maybe not, but it helps when others respond, or want to see more, or offer exhibits, or dangle the possibility of collecting what I produce. Do I have to worry about being "collectible"? T. S. Eliot tells us that "Agamennon cried aloud". Is that better than Agamemnon snickering? What if some modern Agamemna neither laughs nor cries. Maybe she's actually bored, but agrees to see what critics and media tell her to see. Are the non-selected artists rendered invisible? Are they invalidated because their works don't command big bucks at auctions? Is art defined by dollar bills?

That's not even a question.

We know, of course, that female artists have been made invisible in art history. Their presence as doers, rather than as passive done-to-ers, has been deemed irrelevant by the mostly white patriarchal writers of history and preservers of culture. "With these predominantly white male gatekeepers, it's the same kind of person making the same kind of choices, controlling what kind of diverse stories are told". as Radha Blanks describes it. (2) For women artists, their defined Christmas Carol is Silent Night.

No one wants to be invisible. The invisibles are the discarded in society, the homeless, the returning war veterans whose psyches have been shattered, the battered wife, the neglected child, the tortured sex slave, the kidnapped child soldier. "See me. Want Me. Choose me" is what Meredith Grey pleaded on an early episode of "Grey's Anatomy".

"See me. Want Me. Choose me". At least give a damn. That's what artists are saying. And I say it in thunder. 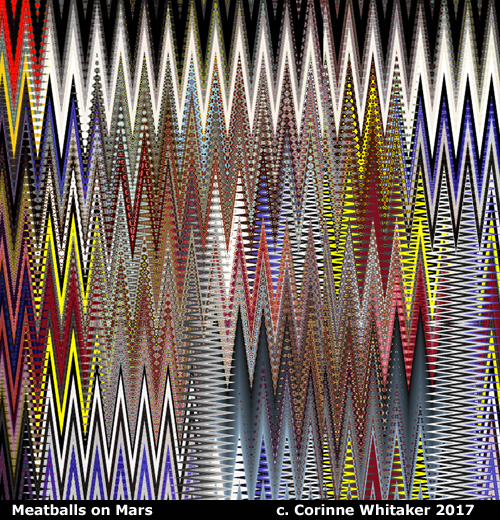