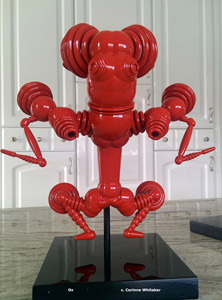 Four magic letters - D, C, G, and A - stand between you and invisibility, between myself and nonentity. These are the molecules incorporated into our DNA helix. We exist, as we are, because they are paired, on our behalf.

But now scientists have added two new molecules, named X and Y, to the mix. This new artificial DNA is expected to create entirely new life forms, "organisms with wholly unnatural attributes and traits not found elsewhere in nature." So say the researchers at Scripps Research Institute in California. (1)

OK, so I create new life forms as CAD models and digital sculpture, but that's at a level of imagination. Or is it? Where do we draw, or rather sculpt, the line?

D, C, G, and A are familiar to me in another way. They are among the notes that I choose, using Artificial Intelligence, to create the Music Madness that you now find on these pages. Of course I am composing sounds never heard before, but I find in them an eerie beauty. There are those who will say that I am destroying a noble heritage, that this action of mine amounts to musical heresy. They find Artificial Intelligence frightening, and not without reason.

There are three more letters that really frighten me, I C E. These are the folks newly emboldened to break up families, to separate children from their parents, as if that would make us all safe from terrorism. When children in Central America want to come here to unite with their parents, those parents can now be prosecuted for human trafficking or smuggling. If the Pope says that "even atheists can go to heaven", surely immigrants can as well. Surely incarceration is not the appropriate way-station.(2)

By and large these are hard-working tax-paying individuals who have added immensely to the character of our nation. They have committed the sin of being born on the wrong soil, or perhaps of praying to a God who wrote the wrong bible. Doesn't that make us the terrorists?

The first lady of the United States was born elsewhere: should she be deported? How do we know she pays taxes: she hasn't released her tax returns.

These are difficult questions, engendered by a species that is rapidly designing its own replacements. Am I a traitor to my own kind, by embracing what these new technologies have to offer? I hope to add beauty to the world, but so, I suspect, do the scientists.

Is there a superior intelligence overseeing what's happening? Call Her/Him what you will, from the Buddha to the ineffable and unnameable, it seems to have stumbled along the way. Sometimes I think the human model needs some tinkering - a bit more compassion here, a bit less aggression there. Call it sensitivity botoxing.

But I don't want the letters U. S. and A. to stand for ugly, scary and awful. I am proud of what those letters mean, or used to mean. And I am immensely proud of the protesters who have stood up for sanity, for a proud heritage of welcoming new cultures into our own. They represent democracy at its very best.

They woke America up. We needed to be awakened, to demand a responsible, ethical government. Make sure that you, and yours, wake up too. It is the only way that we can continue to call her the Statue of Liberty, rather than the Statue of Despair.