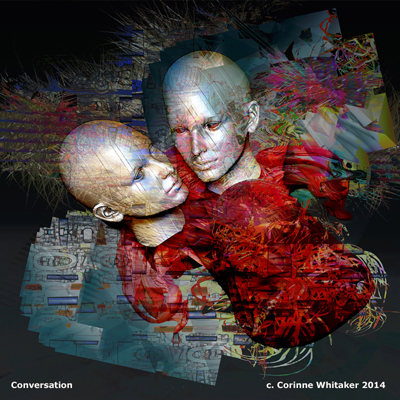 "Garlic and sapphires in the mud

Men and bits of paper whirled by the cold wind

That blows before and after time."

T.S.Eliot knew how to make us think, didn't he, about time, not the time that presses you to your next appointment, or even the time when you were a child. He confronts us with all-time and ever-time, time to take a step back, time to consider what it means to be human, now, in this fragile speck of time that we inhabit. The Welsh poet W. H. Davies said it well: "What is this life if, full of care,/ We have no time to stand and stare."

I think of ancient times, when creatures on the planet faced extinction. The first time was the GOE, the Great Oxygenation Event, roughly 2.5 billion years ago, resulting in what is called Snowball Earth.(1) Then, some 500 million years ago, the first complex multicellular creatures appeared. Again a lack of oxygen killed off 50% of all species. Known as the Cambrian extinction, it meant the end of worms, sponges, and jellies.

The third mass extinction wiped out 60% of all species, like shellfish and huge aquatic arthropods. It seems that ice caps used up most of the water, which had nourished an abundance of life forms. 300 million years had to go by before the planet recovered.

And then came 65 million years ago, when a gigantic meteorite plunged into the earth in Mexico, causing intense global warming and wiping out 75% of species. That was the end of the dinosaurs.

It seems that these extinctions have appeared periodically ever since the first life began. Is it possible that something out there chooses life over destruction, time after eonic time?

We now have the capacity to cause our own mass extinction, one in which we can no longer hide behind cosmic events. Oxygen deprivation and tools of annihilation are in our hands, yours and mine and the leaders we elect. You may think, so what? Some of us will survive. Better to kill off my enemies before they kill off me.

You may say, Black/Chicano/Syrian/Muslim men are a threat to society. We must contain, control, coerce them. Fence them out and cage them in.

And yet Jack Kennedy reminded us, "It was not the black man of Africa who invented and used poisoned gas and the atomic bomb, who sent 6 million men and women and children to the gas ovens and used their bodies as fertilizer."(2)

You may believe, as some ultra-wealthy seem to, that building survival bunkers in places like New Zealand will save yourself and your family from an inevitable man-made disaster. As the author of "Chase Monkeys" said recently, "When society loses a healthy founding myth, it descends into chaos". In fact if this scenario speaks to you I suggest that you read "Doomsday Prep for the Super-Rich" by Evan Osnos in a recent New Yorker article.

You can choose to keep your mouth shut, about the inequities, the inanities, the cruelties and the insanities that you see around you. Or you can listen to Audre Lorde's young daughter: "Tell them about how you're never really a whole person if you remain silent, because there's always that one little piece inside you that wants to be spoken out, and if you keep ignoring it, it gets madder and madder and hotter and hotter, and if you don't speak it out one day it will just up and punch you in the mouth from the inside".

Or, as Lorde herself wrote, "Our speaking out will irritate some people, get us called bitchy or hypersensitive and disrupt some dinner parties. And then our speaking out will permit other women to speak, until laws are changed and lives are saved and the world is altered forever."

I think I'm more of a Warren Buffett optimist, believing in the power of Americans to right a sinking ship. That is, if we acknowledge the holes in the boat.

Maybe, just maybe, it's time to speak out, while the garlic and sapphires are still in front of you, before someone punches you in the mouth from the outside. Maybe we can make our shared corner of the world a corner of compassion and dignity. Maybe, together, we can make the butterfly of caring flap its wings across the oceans of disunity.(3)

(4) You can consider this my official rejection of Toby Keith's line at the inauguration, "We'll put a boot in your ass / It's the American Way". Really? That's not my America. Do you want it to be yours?