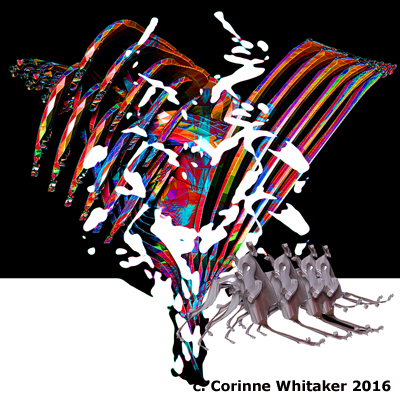 On the PBS mystery "Shetland", I heard these words:

The fish that never swam

The bird that never flew

The bell that never rang

The tree that never grew

While I was pondering their mystery, 10-year-old Adam said, "Ask Siri why fire engines are red". So I did, and here's what she said:

Because they have eight wheels and four people on them, and four plus eight is twelve, and there are twelve inches in a foot, and one foot is a ruler, and Queen Elizabeth is a ruler, and Queen Elizabeth was also a ship, and the ship sailed the seas, and in the seas are fish, and fish have fins, and the Finns fought the Russians, and the Russians are red, and fire trucks are always "russian" around. (according to the Monty Pythonesque application of the principles of logic and etymology)

Of course my Siri is British, so it made perfect sense. You doubt me? Try it yourself.

This discourse is as logical as what is happening in American politics right now. The two major political parties are so out of touch with most of us that I am reminded of Lewis Carroll's words:

He thought he saw a rattlesnake

that questioned him in Greek

He looked again, and found it was

the middle of next week.

'The One thing I regret,' he said,

'Is that it cannot speak.'

But our candidates do speak, and seem to speak in ancient tongues. It inspired me to write this bit of nonsense, as I ponder my ballot:

Sat beneath the foe fum tree

Said she and he to each other.

In a tumble up fumble down billabong skid

As she and he fought each other.

The wise ones said let's butter their bread

With invisible cloaks and silence instead

So Old Glory can say it never bled

As she and he clawed each other.

We voted them down with a mischievous frown

And an utterly unpronounceable noun

In every county and every town

As she and he spat at each other.

And cast your vote for integrity

As all of us help each other.

Does this remind you of Edward Lear's Ploffskin, Pluffskin, Pelican jee"? Of course it does, but we have to make sense of the gibberish around us somehow. So vote, and if Ploffskin and Pluffskin offend you, write in a name that you respect. Let the insiders know that they are on the outs with many of us, as we ship them off to the great Gromboolian plain.

*These verses come from Glasgow's old motto; their symbols appear on the city's coat of arms.