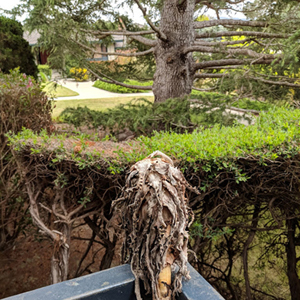 There was something compelling about its shape. And there survived a tiny green spot on its stem.

I took it home, and fed it sunshine and water. Ever so slowly that green bit of hope began to grow. It sprouted shortly into a thriving succulent. Nearby a sibling hint of green has emerged. 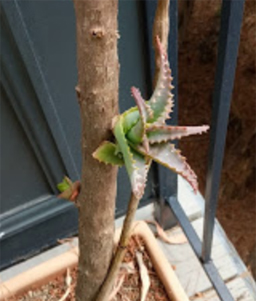 I could have, and could still, excise the succulent from the limb. I could have said of the parent trunk, well it's dying so it counts for little. I could have called it a "songbird", weakling, loser who fell while others still stood on the forest floor. I could have said go back where you came from. You're different. You're foreign. We don't want you in our manicured garden. It could have been the Living Dead, but I didn't demand that it remove its armpit hair.

Birth, and nourishment, come in many different packages. And life, no matter how tiny and fragile, is precious. So on the border, twixt life and death, I reached out to it.

I find beauty in the unusual.

Recently a 7-year-old pachyderm weighing 2300 pounds was subjected to a CAT scan followed by surgery for a nasal infection. The surgeons were beaming. The scientists were ecstatic. And the rhino: did it object? Did it know anything but terror as it was poked and prodded, restrained and incised?

Huge rhinos and dead limbs: we treat them as objects for our own uses. We own the planet; we own the air and all who breathe it. Whether 4-legged, 2-legged, or single-limbed, it is ours to do with as we choose.

We deride others who don't look like ourselves, who honor other deities, who wear fashions that never appear in Vogue. "We The People" has come to mean "We the white male power-hungry dollar-defined People." Those are the chosen ones, the elites, the only ones suitable to decide the fate of others. I cringe at Lee Lozano's comment, "I still smell on your breath the other people's rules you swallowed whole so long ago".(1)

(1) Read more about Lee Lozano here, including her decision to boycott women.