After almost a year of fabrication chaos, "Bloated Doll" has finally arrived. We were trying to simulate human skin using rubber, but at the moment rubber is not available for 3D printing. So we chose a translucent flexible rubber-like polymer. Making a larger print, however, roughly 21" tall, took extensive experimentation and a voyage from Minnesota to Israel to San Diego and finally to Carmel, where it currently resides. The material is sensuous, luxuriantly touchable, and a breakthrough in 3D printing.

It has now exited its polymer cocoon to emerge in a milky-white cast resin floating on a smoky grey custom-designed base.

"Curiosity" joins "Alien, Incoming" in presenting a a botman figure that looks puzzingly at humanity and wonders what these dudes are up to. It is beautifully made of 60% stainless steel and 40% bronze on a natural rock base. From the fabricator: To build steel models, special 3D printers deposit small drops of glue onto layers of stainless steel powder, one layer at a time, until the print is complete. We carefully remove these models from the printer. At this stage of the process, the objects are very fragile, similar to wet sand. The models then go through an infusion process that replaces the glue with bronze, creating a full metal product. Models are then processed to achieve (the) desired finish, (and then) sprayed with a sealant.

You might find it interesting to compare the finished 3D print to the CAD file that gave it birth.

And another interesting comparison is with its new twin, in cast resin with a custom-designed base:

"Alien, Incoming" is unlike anything you have seen before. It is subtitled "Forgive them, for they know not what they do". The subtitle is taken from a bit of art history. Some 40 or 50 years ago, Dominique DeMenil donated a piece of sculpture by Barnett Newman to the city of Houston, Texas, to be placed in front of city hall. The sculpture was titled "Obelisk". But she added a plaque with the words above. The city fathers made her remove the plaque. I think an alien, looking down at us from the reaches of space, might say as well, "Forgive them, for they know not what they do". The piece also references that ambiguous period in ancient history when apes began to walk upright but had not yet become humans. These creatures had large snouts and large thumbs (hence "all thumbs"?).Is it too much to imagine that there are creatures somewhere that resemble our early precursors? Quoting a paleontologist in the New York Times on new findings about Tyrannosaurus: "Bone-crunching predators bigger than a school bus, their faces covered in mangy scales, using not only their nose to smell you out, but their snouts to literally sense you out in a way that we can't even comprehend."

Contemporary viewers might think about a recent plaque proposed by Chanel Miller, the woman raped on the Stanford campus by Brock Turner who only served 3 months in jail for his crime: "You took away my worth, my privacy, my energy, my time, my safety, my intimacy, my confidence, my own voice, until today." Stanford has refused to accept her wording.

Is there by extension another way to communicate? Religious organizations pass on knowledge by vertical trajectories: the words and ways of the past are transmitted to the faithful in the present. Contemporary society, on the other hand, transmits information horizontally, across borders in the present via new means of communication, like the cell phone and the internet. Is there perhaps another pathway for communication? We assume that vertical and horizontal are the only ways to navigate, and therefore to be imagined in sculpture. Is it possible that diagonal is another? Is there another way for gravity to operate? It may be alien, but it could well be incoming.

I call it "Swans", although in its current embodiment it might better be called "Black Swans". Wikipedia describes black swans as "unexpected events with great consequences". This is a new take on 3D printed sculpture, fluidity and grace, elegance and visual melody. It was recently shown at SAS (Stanford Art Spaces) at the CIS/Paul Allen Building on the Stanford University campus and is currently on view at the Paul Mahder Gallery in Healdsburg, CA. It perches, ever so briefly, on a black marble base, as it prepares to take flight.

By now you have read "I Heard the Wild Gander", so you know that the two protagonists are named Goose and Gander. They discuss an artist's view of the newest theory in particle physics, expressed as "It will not be you, it may not be me, but always and afterwards something will be". Here is Goose, as a life-sized 3D sculpture, discussing destiny over coffee with Gander, and perhaps with you as well.

Another attribute to be noted: Gander is black, as a tribute to black men everywhere. When did you last see a black man honored as the subject of a piece of sculpture? Sports figures, perhaps? But they tend to be in uniform, essentially hidden, "pretend caucasian". Gander does not pretend; Gander's only uniform is the beauty of his black skin. Note that he has a copper band on his knee, the same color as Goose. She wants to keep an eye on him, so she knows what he is up to.

Below you can see Goose as she appeared in a solo exhibit at the Peninsula Museum of Art in Burlingame, California:

These two quasi mythical figures are also called Eve and Adam. Eve came first, with a piece of her rib on Adam's knee. He bowed before her, in the Garden of Inequality, acknowledging her wisdom. Eve is copper, an amalgam of skins and earth tones, a blend of biologies and geographies, a material that resists corrosion by air and water, gossip and derogation, a material mined from deep within the earth. She is all attitude, saucy and defiant. She may well be God's selfie, product of the Creator's dreamscape. What happens if God wakes up, looks in dismay at her creatures on Earth, and says, "Siri. Delete them"?

Eve and Adam exist in a sphere of our imagining, in the realm of myth and fairy tale. These two sculptures exist in the digital flesh, to remind us that myths are made to be unmade, that we are all instant memes in an infinitely vast cosmos, to tell us that unless we wrench ourselves free of our addiction to war and violence, to hatred and discrimination, genocide, infanticide and femicide, we may all perish by our own hands, if not by an intergalactic intervention. 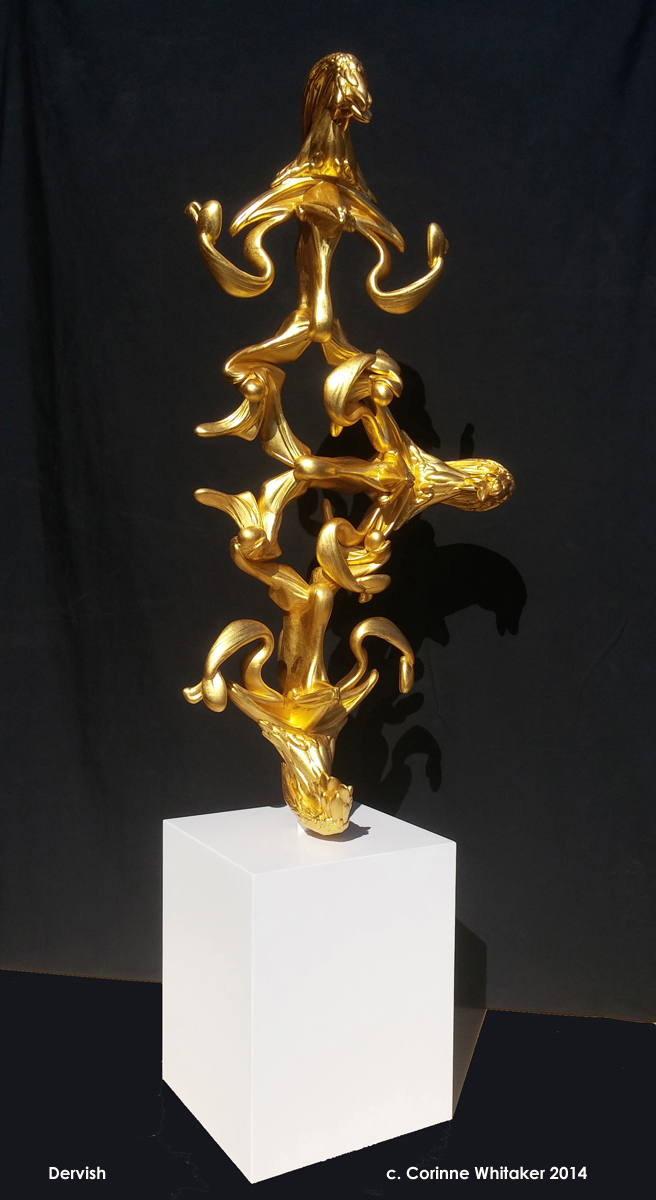 Below you will see "Dervish" in spiritual white. Now look at it in hand-painted 22 karat gold leaf. Remember, this is 3D printed, and an outstanding example of what can be done. It is 51" tall. The raw physical 3D print was prepared for traditional 22-karat gold leafing often found in ecclesiastic art and architecture. Recently I have nicknamed it "Goddess of Iniquity", maybe because of the greed and destruction that surround the history of gold. Nations have crumbled for it, individuals have died for it. That death wish attendant to our search for gold contrasts with the exquisite hand-craftsmanship that went into the fabrication of this sculpture. 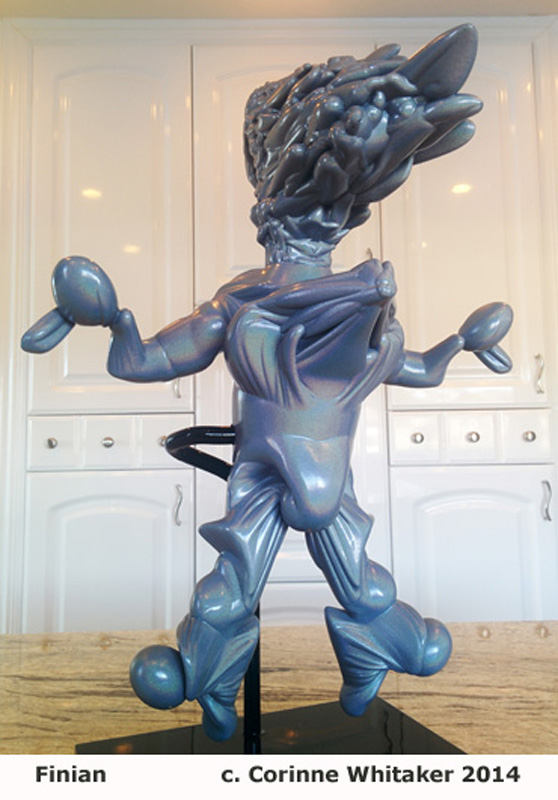 "Jive" and "Finian" have just joined our family of 3D printed sculptures. "Jive" is finished in multiple layers of imported iridescent paints upon a high tech polymer base. "Finian" is similarly painted, reminding me of "Finian's Rainbow". I was intrigued to find out that St. Finian is known for the birds said to cluster around his birthplace, and for his miraculous ability to cross a river, as I love to cross into the unknown in creating these forms and using experimental materials.

Have I told you that sculpture can be fun? Here is Jive all dressed up for the holidays. 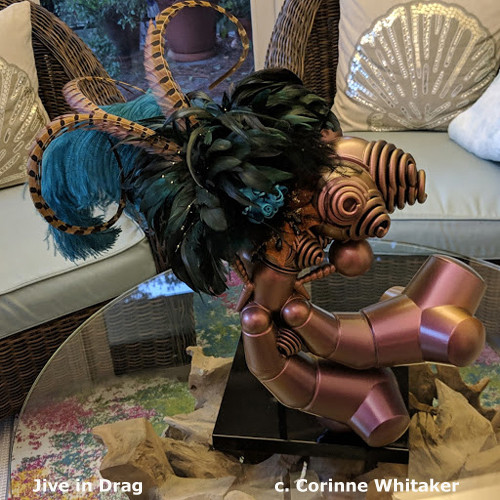 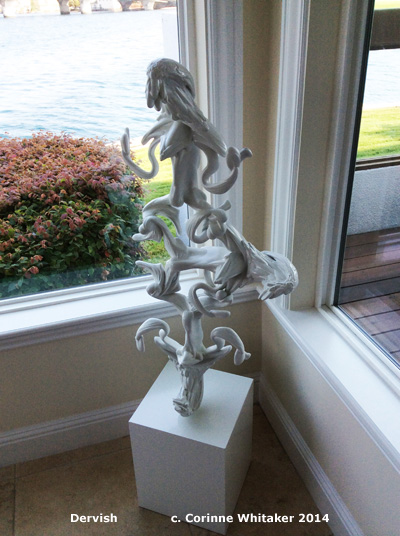 We are immensely proud of "Dervish", at 4 1/2 feet tall, our just-completed 3D printed sculpture. The sculpture is named for the 800-year-old mystic tradition of whirling dervishes devoted to spirituality. In the twirling ecstatic dances originally from the Ottoman empire, a gentle swaying motion gradually evolves into a state of intense rhapsody. Today's whirling dervishes usually include twelve musicians and twelve dancers. According to Burak Sansal, at All About Turkey, "The fundamental condition of our existence is to revolve....From the cell to the planets and the farthest stars, everything takes part in this revolving. Thus the Semazens, the ones who whirl, participate consciously in the shared revolution of all existence." Dervish is my tribute to the power of music, dance, and ecstasy to add joy to our lives.

Meet Tin Man, one of our newest 3D printed sculptures. Tin Man stands about 17" tall (although he would be fabulous at six feet tall in a corporate entryway). Full of attitude, he is ready to engage you in a conversation.

We are delighted to show you another new 3D printed sculpture, created for two International Conferences on 3D printing, one held this summer at the University of Texas at Austin, and the second next winter at Southwestern University in Georgetown, Texas. The theme of the second conference is "What Things May Come". Wynken, Blynken and Oz suggest what another species might look like. I was invited "to participate as a distinguished artist" in the two exhibitions. Mary Visser, the Curator, has said of this work: "Corinne Whitaker takes on whimsy and narratives that seem to float in time and space". 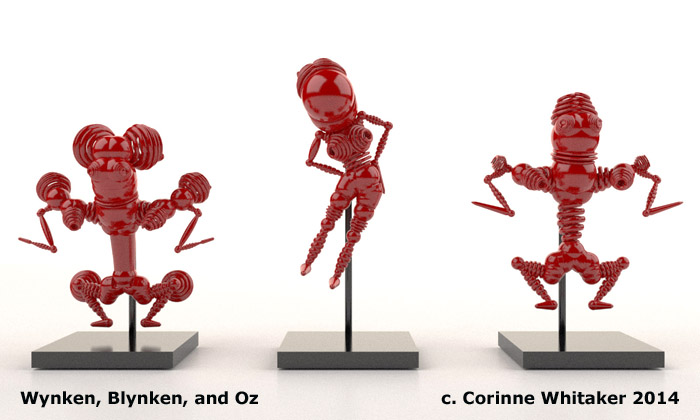 Here is another triptych of the Wynken creatures, this time done in flaming red.

Now look at "Black Pearl", a totally machine milled 3D sculpture. Black Pearl measures 18"h x 20"w x 20"d and is a 3D printed plaster based sculpture with a porcelainized finish. It sits on a steel base. 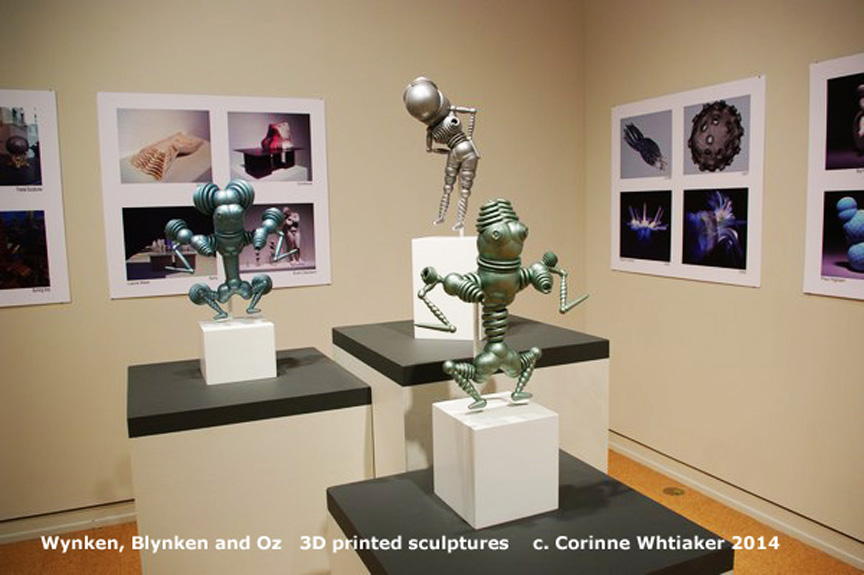 Here you see the triptych "Wynken, Blynken and Oz" as it was shown at Southwestern University. From the artist's statement: "We also knew that another species would soon be replacing our own. We were willing to cross the borders of biological sanity and imagine creatures that were not mirror-images of ourselves - hybrid species, multiple limbs, beings that never fart, don't wet their beds, and don't throw up over Mars. As the borders between living and nonliving began to dissolve, we imagined a species that could exist in the synapses of consciousness, nanorobotic forms that might not recognize us as their ancestors, and might not want to.

3D printing brought the magical world of tomorrow into today's toolbox. Wynken, Blynken and Oz are three of those maybe-tomorrow figures, sailing that magical sea of 3D printing." 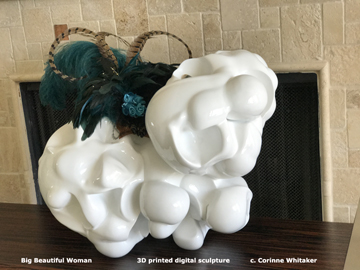 Barbie and Twiggy have entered the dustbin of history. We now have Big Beautiful Woman, 3D printed to show what women's bodies are really like, in all their glory. In the 1930's, Thomas Hart Benton taught his "hollow and bump" method of portraying the human body, concentrating on muscles rather than surface. "Big Beautiful Woman" is today's hollow and bump model.