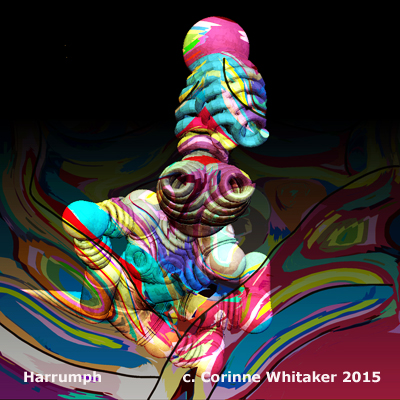 I had a brief conversation with Alexa recently. You do know Alexa, right? The voice of Echo Dot, Amazon's ear into your private spaces:

Just imagine if Alexa were the translator between two warring nations, or a couple in trouble, or a teen and their parents.

The issue here is communication. How do I know if you see what I see, or hear what I hear? Some 50 years ago NASA brought back black and white images from a moon spaceshot. Scientists at JPL (Jet Propulsion Laboratory in Pasadena, California), colored the images. I found myself wondering whether scientists see color the same way artists do. In an atmosphere of no gravity, does color manifest itself differently from a rooted planet like ours?

I tried another A.I. experiment. When I was composing music using A.I., it was clear to me that the few algorithms available were all based on western music. I wondered if that was true of lyrics as well, so I used an A.I. algorithm to create some lyrics. It rapidly showed itself to be based on hip hop language, and written with a patriarchal mindset. Here's what occurred:

"I got the focus got the heart

I like to hang out with scorpio and lollapalooza

But when left alone,

My mind turns straight to kinks.

We don't realize we all under a microscope

Dying of thirst yet willing to die thirsty

I drop jewels like my nuts dropped out of my briefs

Never eat it you'll see that Eve was deceived

Now I know it's official."

I remember that my kids had a private language called Potato Language. It allowed them to say things to each other without myself or their father having a clue.

I make up words all the time, like snifferdoodle and cardalicakes. My newest favorite, Krepildockerschpe, will soon be published as a book and is currently the title of an A.I.-composed song.(1) Inevitably it makes people burst out laughing - they start making up their own words, or remembering word games they played in childhood.

So let's make up some new words together. I did some research and unearthed an extinct language that seems to have disappeared into the dustbin of history. It included some words that might taste strange to a 21st century tongue but I think we can resurrect them. After all. everything you are reading, doing, seeing right now is based on an alphabet of only 2 characters - a zero and a one. English itself needs a structure of 26 letters. As a consummate double-crostics fan I figured I had the skills to solve a word problem.

Three nascent words first appeared: ethics, kindness, and dignity. Maybe we can pass them on, fling them from the rooftops. Maybe they will be contagious. Maybe others will catch them.

I can only hope.