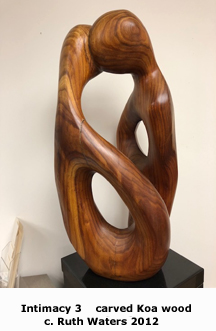 Our guest auhor this month is Ruth Waters, Founder and Executive Director of the Peninsula Museum of Art in Burlingame, California.

I used to say/pontificate that you can't truly understand a culture until you can think in that language. Having studied several "foreign" languages (Spanish, Russian, French, a little Mandarin) I thought I knew what I was talking about (and I can't think in any of them except English). Now I think the function of language is much more complicated - and culturally controlling.

Names are an excellent example. Think about it - "Anderson" and "Johnson" are common family names that evolved from "Ander's son" and "John's son". European-based cultures require official recognition of paternity. With Asian and Hispanic cultures, it varies. But almost universally, the paternal heritage is honored, the maternal heritage is ignored. In fact, the female equivalent of "John's son" is "Johnsdaughter" (only spelled differently, depending on which Scandinavian language it occurs in).

Gender labeling is even more obvious (and mis-pronounced by most of us) in a number of eastern European cultures. For example: tennis pro Maria Sharapova's name is commonly mis-pronounced Shar-a-POV-a. Her father or brother would be called Sharapov, pronounced Shar-AP-ov , and the final "a" is added to ensure Maria's gender is announced as female.

And then there is marital status. . . I remember being newly married and returning to Stanford for our senior year, applying for a driver's license, and being informed that it was illegal to use my family name! Which reminds me - can't we get rid of the term "maiden name" for our family names, the (paternal) name of the family we were born into? What is the comparable term for unmarried men? Oh, of course, they always carry the paternal heritage, and their marital status is not considered definitive.

Over time, the English language itself has evolved to become very male-centric: manpower, manhole, manuscript (I suspect that almost all ancient scribes were male. Whose culture and accomplishments do you think they were recording for history?), man up (woman down?), mankind. . .

And on and on - if a term identifies power, strength, and/or authority, the basic term is presumed masculine. Congressman / Congresswoman Interesting - there are a few titles indicating status and requiring respect that are not gender-specific: President, Senator, Professor, Doctor, for example.

So, what can we do about the linguistic trap we are caught in? Ideas? Plans for insurrection??? After all, we ARE "brazen hussies" who don't "know their place".

One solution I have observed (and wish I had thought of about 60 years ago) is to masculinize our first names or at least disguise them. For example, I know a Barbara Jean who has gone by BJ for many years, and another who uses her family name as her first name - actually I know of several successful women artists who do that.

It's too late for me, but I will never forget the owner of a major gallery who liked my work, scheduled me for a solo exhibition, and then actually asked me if I could get my husband to "front" for me because "people will buy more and pay more if they think a man has done the work".

And it hasn't stopped. During two recent solo exhibitions, with my name on a LARGE sign on the wall, people complimented my husband on "his" work! (He corrected them, but still -)

What I keep stumbling against (in my head) is that between testosterone and cultural assumptions, males are willing to kill and injure in order to gain and maintain power, and females (generally) are not. (1)

(1)Viewers might want to see "A Memorial To Crimes Against Women and Children in Ghostly Glass".

You can learn more about Waters, her process, and her work at her website.